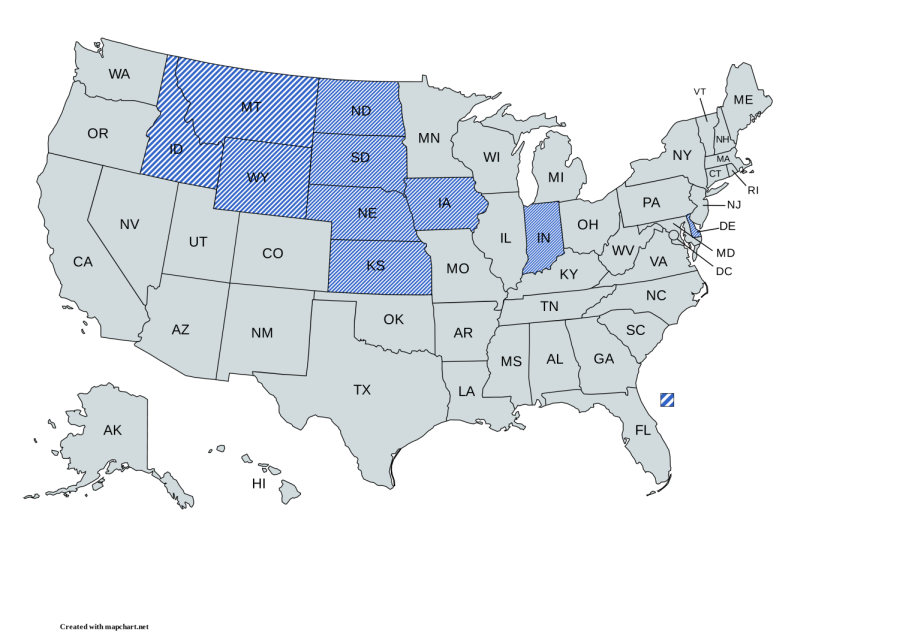 A Nest Countdown: Most to Least Boring States (Part 1)

We all know what the worst state is (East-West Dakota), but what is the most boring state?

In this new column, to be released weekly, I’ll rank all 50 states based on how boring I think they are, starting with the most boring and ending with the most interesting ones. I’ve added one picture for each state to help you visualize the scene.

Before I start, there’s a disclaimer. What I say about the 50 states, especially those toward the boring end of the list, is greatly exaggerated or completely made up. I did basically no research, so a lot of what I write is almost certainly completely wrong. I don’t hate any state, and if you’re from a state you feel that I have disrespected, I’m deeply sorry.

With that said, let’s get on with the ranking.

When’s the last time you thought about Montana? The answer is never. Be honest, aside from Hannah Montana; you’ve never thought about the so-called Treasure State. Not even during election season, when we are forced to consider normally irrelevant states, do we consider Montana. Montana has no national parks-wait, never mind, it has Glacier National Park. But Montana is so forgettable I always assumed that park was in Alaska. My point still stands, and that is why Montana gets the rank of the most boring state in the Union.

Let’s be honest here. Indiana has nearly nothing in it. You hear states referred to as flyover states, because you’re most likely to see them from 30 thousand feet up, and Indiana is definitely a flyover state. It is also a drive-through state because if you’re not there to watch race cars in Indianapolis, you’re at a gas station or on a highway en route to some other state. Indiana is boring, but not quite boring enough to overtake North Dakota or Montana.

Nebraska is a state so boring that I struggled to come up with anything witty to say about it. It could be argued that it should be in first place on this list, but as a neighboring state to Missouri, I’m at least sure it actually exists most of the time, which can’t be said for the top three states.

South Dakota should probably be higher up on the list than it is, but it’s one redeeming quality-Mount Rushmore-is slightly more memorable than the assorted claims to fame of the top four states. Nevertheless, if your state’s only major landmark is the mountain you carved Washington’s big dumb face into, that’s a problem.

I’ve been to Iowa before, in passing. There’s hardly anything there at all besides flat land and gray skies and the scattered small town here or there. Overall, Iowa only ends up at the number six spot because it kind of looks like Missouri’s hat, which is pretty neat.

I could say that Kansas is the statistical average of all Midwestern states and place it in the number one most boring spot, but that wouldn’t be quite fair. Kansas is so average that it has ascended to stand above the rest of the square flyover states. It is not merely flat, it is so flat the biggest change in elevation comes from the curve of the Earth. Kansas is so in the middle of nowhere that it’s actually at the geographical center of the lower 48. These factors make Kansas a bit more interesting than it ought to be but still pretty boring. (I’m not going to consider the Kansas-Missouri rivalry, because there’s a lot of history in that and none of it makes Missouri look good.)

Most states have names that actually mean something, right? For instance, we call Louisiana Louisiana because the French claimed it, and they named it after one of their many kings named Louis. We call New York New York because it reminded some English settlers of old York. We call Arizona Arizona because Arizona is a derivative of the old Spanish name Arizonac, which itself is derived from alĭ ṣonak, the name the indigenous Tohono O’odham people had for the region. We made the word Idaho up, and the story of why the state was eventually named Idaho is, in fact, very stupid. Idaho only has its stupid name and the potato, so it gets the number eight spot.

Delaware, besides being the home state of US president and ice cream criminal Joe “chocolate chocolate chip” Biden, doesn’t have a whole lot that’s interesting going on. It has a low population, but not so low as to be at the bottom. The waters are full of blue crabs, but that doesn’t make much of an impact when you’re right next to Maryland. Overall, Delaware is a perfectly fine, not actively boring state, but it’s still one I rarely think about.

Finally, for this installment, there’s Wyoming. Wyoming isn’t ranked as boring as it could be, because of the land itself. Despite the rumors Wyoming doesn’t exist, the Grand Tetons and Yellowstone definitely do. Wyoming is also the least populated state. And while that’s probably for the best because Yellowstone could explode at any time, there’s not a whole lot of human activity in the area. Unfortunately for Wyoming, two parks aren’t quite enough to get into the teens, but they are enough for the tenth most boring spot.

Check back next week for the next batch of states!