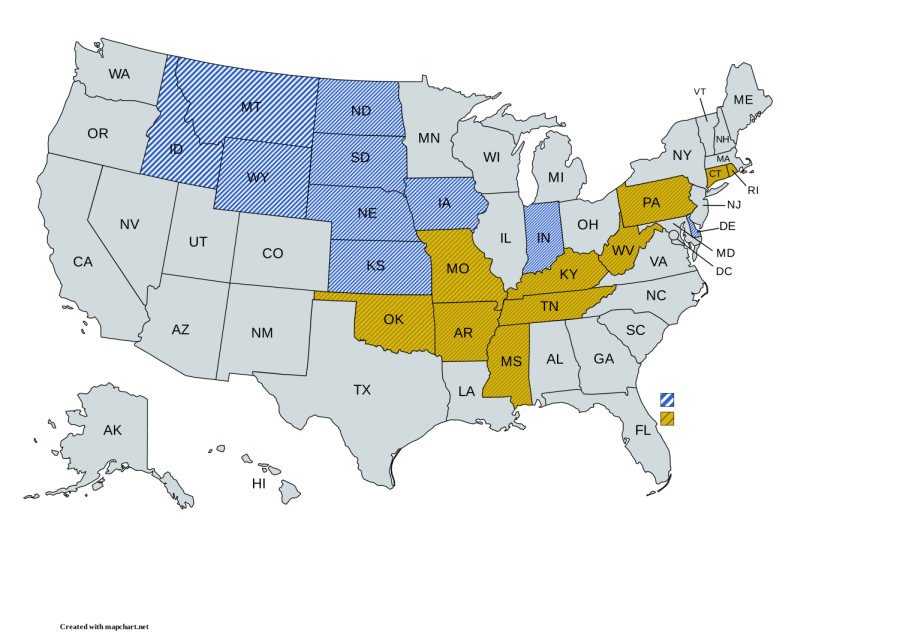 A Nest Countdown: Most to Least Boring States (Part 2)

Welcome back. On April 14th, I ranked the ten most boring states, from Montana to Wyoming. This week, I’ll be covering the following ten states. So here we go.

My sincerest apologies to any Fallout 76 fans reading; I have to say West Virginia isn’t that interesting of a state to me. The Blue Ridge Mountains and Shenandoah River run through Virginia as well, with the Blue Ridge mountains running from Pennsylvania to Georgia. With those key landmarks shared by other states, all West Virginia has is coal mines and that song. The state winds up at eleventh most boring for memorability, but I can’t rank it any lower.

A few states are only in this section of the rankings because of horrific tragedies or draconian policies. They would be much more boring if they weren’t obsessed with human rights violations. What better place to start off that list than Oklahoma?

For the uninformed, Oklahoma was the endpoint of the Trail of Tears, in which thousands of native Americans were forced off their land because Andrew Jackson decided it would be better used by slave plantations. Now, I won’t be counting native reservations here because that just feels really wrong to me. However, the rest of Oklahoma is flat, hot, and boring.

Connecticut falls into the same trap as Rhode Island in that it’s just big enough for me to think about it but not interesting enough to me to get a better ranking on this list. Connecticut and Rhode Island are beautiful and historical but a bit too unassuming.

While I do have fond memories of time spent in Arkansas as a kid, those trips occurred a decade ago, and since then, I have found nothing good to say about Arkansas. In fact, the only reason I’ve even thought about Arkansas in the past few years is because of their attempts to legislate trans people out of existence.

Number three on our list of human rights violators and number 16 in the rankings is Mississippi, a state I rarely think about except when something horrible happens there, like the recent welfare fraud or the fact they didn’t change their flag until 2020. However, there is a slight beacon of hope for the state of Mississippi to get more interesting, and that’s this giant catfish story.

Like Connecticut and Rhode Island, Pennsylvania is a state I rarely think about, which means it should probably be higher on this list. However, I’m ranking based on feelings here, and to me, Pennsylvania just feels more interesting than Connecticut, Rhode Island, or Delaware. For instance, it has the Appalachians, Philadelphia, and Pittsburgh, and those feel like they count just a little more. I don’t know what to say here, and I can’t justify this spot very well.

The only reason I think about Kentucky most of the time is KFC, which, based on some of the rankings I’ve given, means it should have been in the first installment. However, KFC’s marketing team has managed to plunge the Colonel deep into my brain, and he is now inextricably linked to Kentucky. Help.

Rounding out my list of states that are interesting because they’re dystopian is Missouri, the state that brought us Mike Parsons, Eric Schmitt, and Josh Hawley. I’ll admit, the main reason Missouri is this low is that I live here. And while I don’t hate Missouri, most of what’s newsworthy here is terrible for everyone who has to live here. Yet a lifetime spent here has made this state more interesting to me than it would be if I was looking in from the outside, so it gets nineteenth.

Tennessee is an interesting state, but like Pennsylvania before it, it’s not quite interesting enough to make it into the next installment. Overall, as we near the middle of this list, you’re probably going to see more hunch-based ranking. I feel like Tennessee is the point between states that would be ranked higher without competition and states that would be ranked lower without competition.